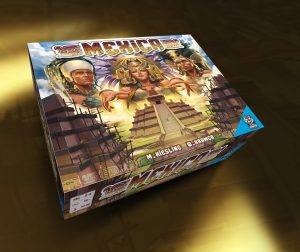 Mexica is the third game in the Mask Trilogy, designed by Michael Kiesling and Wolfgang Kramer and originally published in 2002.

Now it is back with, as with the other two games of the Mask Trilogy, cool 3D resin temple pieces!

In Mexica, players try to devide the land and build temples. At the beginning of the game, there is one big landmass.

Over the course of the game, players build canals and bridges, as well as 3D resin temples in four different heights.

Players score points both when they close an area of a certain number of spaces as depicted on tokens, as well as at

the end of the first and second phase of the game.

We are publishing the Dutch and German version of Mexica in cooperation with Super Meeple.

The game is 100% language independent, and rules in other languages are

available online in many languages. There are no rule changes between the old Ravensburger

There is over 800 grams of resin pieces in this version of Mexica!

in our webshop and at selected retailers.

Watch Tom Vasel give Mexica a Seal of Excellence:

Shut Up & Sit Down