You can pre-order Monuments now in our shop. 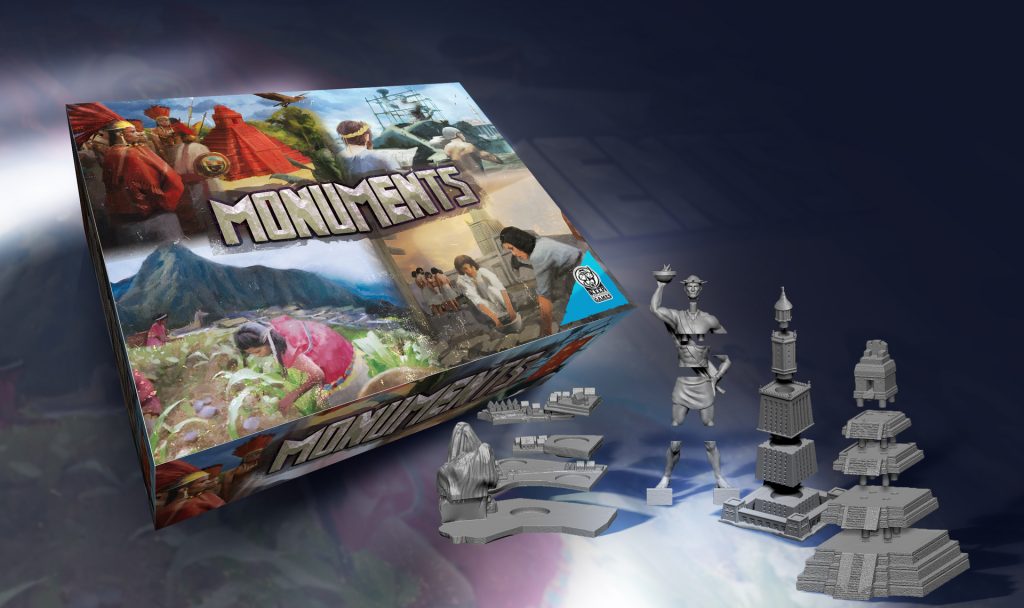 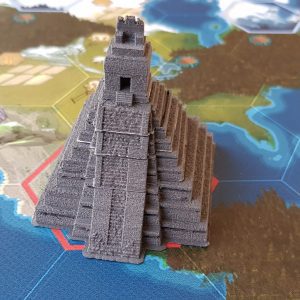 Play as one of the ancient civilizations and start building your Monument!

In Monuments, you play as one of the ancient civilizations. These are the Greek, Egyptians, Mayan and Incas in the base game (2 more will be added to the 5-6 player expansion). It is your goal to build your Monument as fast you can, but you can’t neglect your empire and your people. The game ends after the round in which one player finishes their Monument, but only the player with the most Victory Points wins the game!

Monuments takes a different take on the civilization genre. There are no ages, no tech trees, advancement tracks, no long waits between turns, no 4 hour game, nor a 40 page rulebook. In Monuments, the focus is on building the Monuments instead. Each player has the same 10 action cards. A turn consists of one thing and one thing only. A player either plays and discards on of his 10 action cards, each with a simple and quick action, or takes all discarded action cards back on hand. This makes for very little downtime between turns. A game plays in 60-120 minutes at about 30 minutes per player on average, depending on how familiar players are with the game and how much competition there will be in the end.

Board Deck and Dice review 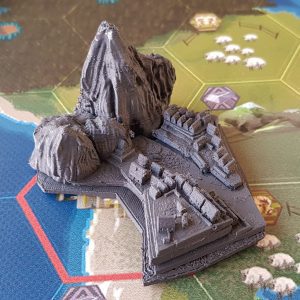 Machu Picchu, the monument for the Incas in South America

One of your action cards reads Build your Monument. Each Monument needs 5 layers to complete. You build it one layer at a time. But there are three requirements before you can build a layer. You need to control a number of land areas, you need to control and spend a number of resources, and you need to sacrifice a number of workers. With the Production and Populate action, it usually isn’t too hard to get the resources and workers you need. However, in order to build Layer 5 of your Monument and therefor finish the game, you need to control 12 land areas. If I tell you your home continent has only 9 land areas, and you can find an additional 2 land areas on an island nearby, you quickly realize that you need to find that final land area somewhere else, and that is assuming no other player already took control of one of ‘your’ 11 areas… 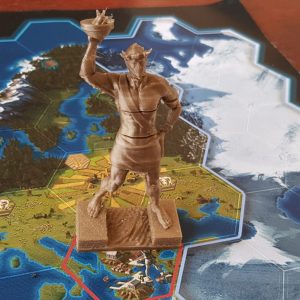 The Collosos of Rhodes, the Monument of the Greek in Europe

So how do you get control of those areas, resources and workers? You have 10 action cards, and most cards work with other cards. For example, you can first use Movement and place your starting workers on some land areas’. Then, with Production you have them produce some resources. Then you play Build a Building and you spend those resources to build a Town. If you have two workers at a land aread with a Town, you can then use the Populate card. Which places a new worker at that town from your supply. Later in the game, after unlocking the ability to train military units, you can then use the Train Military Units card to make a worker into an army, navy or airforce unit. When you have one or more military units adjacent to enemy territory, you can use the Attack card to initiate a battle! As mentioned before, when you have enough areas, resources and workers, you can then use Build your Monument to build your Monument. Each time you build a layer, you get two bonuses. You have a personal bonus deck, from which you can choose a bonus. There are also common bonuses, that are available for all players to choose from. However, the later you are building a layer, the fewer bonuses will be available to choose from as other players already took them.

The Great Pyramid, Monument for the Egyptians in Africa/the Middle East

Then, you have three other action cards. There is the Trade action, which simply lets you trade resources you control with the supply for another resource. There is the Take Quest Cards action card. With this card, you can take a number of Quest Cards and keep at least one. On it, there are 1, 2 or 3 requirements. If you finish these requirements before game end, you get a number of Victory Points. If you did not finish a quest card in time, you will get a negative number of Victory Points instead. And finally, you have the Upgrade an Action Card card. Each action card has two sided, a red side and a green side. Each card starts on its red side. For two resources as noted on each action card, you can upgrade that action card by playing the Upgrade an Action card card. You then pay the resources and flip the card that you are upgrading (either in your hand or discard pile) to the green side. From now on, it has a more powerful action! For example, the Movement card lets you move up to two units on its red side, but up to three on its green side. Similarly, Production lets you produce on up to two versus up to three areas. All 10 card action cards have a more powerful ability on their upgraded green sides. 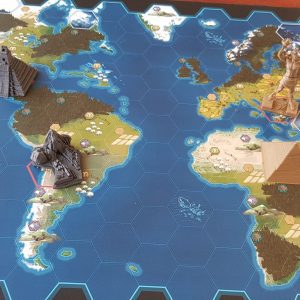 All Monuments on the game board. (Note: only Europe has finished artwork at this time, the other continents have placeholder artwork)

When someone finishes their 5th Monument Layer, the game ends when the current round does, and players count their Victory Points. Note that each player scores more points on one item and fewer points on another item, as depicted on their score modifier card. These are the basic, unmodified points for the different aspects of the game:

• 6 VP per completed layer of monument

Whoevers scores the most Victory Points wins the game, and that is how Monuments is played! 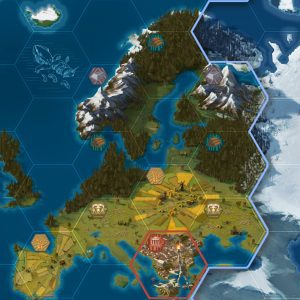 The finished artwork for Europe.

You can download the preliminary rules for Monuments here.