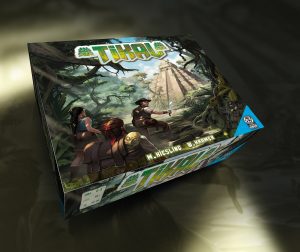 Tikal is the first game of the Mask Trilogy, designed by Michael Kiesling and Wolfgang Kramer. It originally publushed in 1999, and won the German ‘Spiel des Jahres’ price in that same year. 19 years later, Tikal is back. But this time, with cool 3D resin temple pieces instead of the cardboard temple pieces of the original!

In Tikal, players explore the jungle of Guatemala, at the ancient Maya site called Tikal. The Mask Trilogy works with an action point allowance system. This means that in Tikal, each turn players first draw and place a tile, and then use 10 action points as they wish. With these action points, they try to maximize their scoring through two aspects of the temple complex; temples and treasures. When players find a temple, they can excavate it in order to make it worth more points. But beware, as this also makes the temple more interesting to other players, who can try to take over your temple. Players can also collect treasures and maximize points here through means of a set collection system. There are three semi-random moments in the game when there is a scoring round, where players will collect points for the temples they currently control (have the majority) and the treasures they collected. And there is a final scoring when the last tile is layed out on the board. Whoever has the most points wins the game!

We are publishing the Dutch version of Tikal in cooperation with Super Meeple. The game is 100% language independent, and rules in other languages are available online in many languages. There are no rule changes between the old Ravensburger/ Rio Grande and the new Super Meeple/ Keep Exploring Games versions.

Tikal has been released in October 2018. You can order it in our webshop or at selected retailers.

Here is Zee Garcia from The Dice Tower, awarding our new version of Tikal with a Seal of Approval 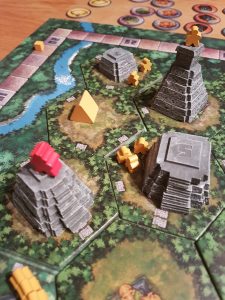